Know All About Weed Control in Groundnut with Herbicide - Dhanuka 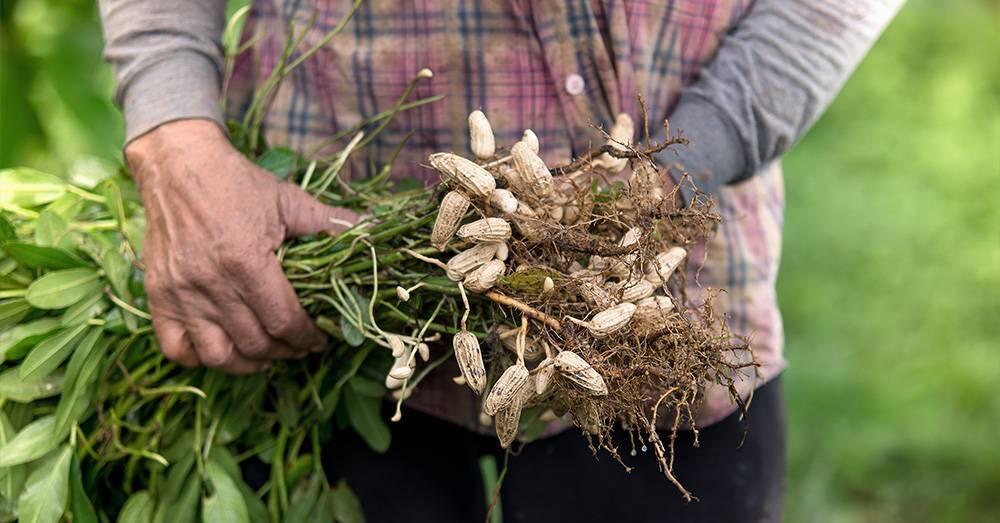 Know all about weed control in groundnut

Among all the oilseed crops in the country of India, groundnuts are one with a higher nutritional value. Rich in 13 vitamins and 26 trace minerals, they are also a great source of good fats and proteins. Groundnuts are also one of the easily available nuts which Indians have moulded into the recipes of a range of dishes from 'badam chaat' to groundnut 'chikki' to suit their tongues.

But a lesser-known fact is that, among all the oilseeds produced in India, groundnuts hold the Numero Uno position. According to TIMEIS, “The annual production of groundnuts is around 7180.5 thousand tonnes approximately” and “groundnut farming in India is done in around 8.5 million hectares of land.”

Groundnut also has a significant contribution to making India a large importer of edible oils. Therefore, every groundnut cultivator tries to put as much care as possible into the care and cultivation, starting from weed management to pest control.

At various intervals during plant growth, a number of major weeds appear around a groundnut plant, disrupting its normal growth. A few such weeds are Celosia argentea, Leucas aspera, Arachne racemose, Cyperus rotundus, and others. There is a direct relationship between the effectiveness of weed control with the type, life cycle, and propagation method of the problematic weeds. And henceforth, weed control in groundnut can be classified broadly into two categories: mechanical and chemical.

Indian farmers have been a witness to and later a practitioner of the age-old manual method of weed management by individually pulling them out from the soil using their bare hands at regular intervals. Although this practice came with its own benefits, like, in the process of pulling out, it also helped to stir the soil, leaving spaces for aeration, it is not the best method. Perhaps the most formidable drawback of the mechanical method is that, despite strenuous efforts, it does not guarantee a complete weed-free environment.

The mechanical process went on for years for a number of crops, not only groundnut, until it was gradually replaced by chemical weed management. This arduous task of constantly using hands to pull out weeds could now be done with a few simple chemical weed controls available easily now in India.

The use of herbicides in combination with mechanical methods is necessary to ensure that weeds will not grow under any condition. Thus, chemical weed control came into the picture. Weeds can be better controlled with herbicides through pre-emergence and post-emergence herbicide applications not only in areas where agricultural labour is scarce and expensive, but along with mechanical weed control.

Herbicides work 100% effectively when the other associated factors are met, for instance, the humidity of the soil, temperature, atmospheric pressure, and so on, during application. Farmers who have been ancient practitioners of the manual method inherited from their fathers and grandfathers may not initially be up for the chemical method or sometimes may not even be able to afford it, but the government today, with more and more reforms in the agricultural sectors, are providing scopes for educating the farmers of the country on this and reducing the overall cost of herbicides. As a result of the All-India Coordinated Research Project on Weed Control, certain herbicides have been identified, particularly groundnut herbicide Quizalofop-ethyle 5%, Imazethapyr 10%, Diclosulam 84%, Pendimethalin 38.7% etc.,. which are capable of controlling weeds across the country. Dhanuka Agritech Limited has an assorted range of herbicides of premium quality, which helps solve the problem of weeds among farmers and gives instant results. Dhanuka’s offering for weed control in groundnut are, Tornado, Targa Super, Dumil, Dabooch, etc. Tornado is a newly launched product by Dhanuka Agritech Limited, a broad-spectrum, Systemic & Post-emergence herbicide which controls broad leaf & narrow leaf weeds effectively.

Education and practice among the cultivators and crop-growers in the country is the first step towards awareness about herbicides. Then comes its usage. The quality of herbicides also has an important role to play in the end result. Herbicides from Dhanuka Agritech Limited can give the desired result to yield high-quality crops.

Know all about weed control in groundnut

We, Dhanuka Agritech Limited, hereby bring to the notice of all concerned that fake job offers are been circulated on behalf of Dhanuka Agritech Ltd. by certain individuals/entities by sending false emails and asking the job seekers to pay processing fee to get the interviews done. We at Dhanuka Agritech Ltd. follow an extremely professional and comprehensive recruitment and selection process where:

2) We don't ask our vendors to arrange any online interview like skype or google hangout etc. It is only arranged by Dhanuka Recruitment Team.

3) Dhanuka does not ask for any processing fee or security deposit against any interview or Background verification and neither any of our recruiting agencies charge any amount for processing the profile for recruitment process.

4) The offers are always made directly by Dhanuka Agritech Ltd. and not by any third parties.

• Anyone making an employment offer in return for money or other type of gain is not author,. by Dhanuka Agritech Ltd. and is not offering an approved job.

• Dhanuka Agritech Ltd. reserves the right to take legal action, including criminal action, against such individuals/entities. All vacancy in Dhanuka are listed in the company's career webpage: https://www.dhanuka.com/current-openings in addition to being advertised in the job portal.

If you receive any unauthorized, suspicious or fraudulent offers or interview call, please write an email us at recruitment@dhanuka.com